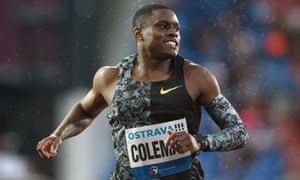 Christian Coleman, the world’s fastest man and favourite for 100m gold at the world championships in Doha next month, is facing a two-year ban after allegedly missing three drug tests in a 12-month period.

Sources confirmed to the Guardian that the American sprinter, who leads the 100m world rankings with a best of 9.81sec this season, had missed the tests but was contesting at least one of them. Under the rules of the World Anti-Doping Agency athletes are required to put details of their whereabouts for one hour every day in case they are required to be tested – with three missed tests across a year counting as a failed test.

If the 23-year-old fails to persuade the authorities there were extenuating circumstances, he could be banned for up to two years, which would rule him out of the Olympics in Tokyo next year. However, sometimes lesser penalties are applied. In 2017 the Olympic 100m hurdles champion Brianna Rollins-McNeal was banned for only a year by the US Anti-Doping Agency after missing three drug tests in 2016 – two of them after she forgot to update her whereabouts details when she was attending a fete of honour in her hometown and travelling to the White House to meet the then US president, Barack Obama.

Coleman’s management team did not respond to a series of questions about the case, while Usada and the IAAF, athletics’ governing body, said they could not comment. The American, who has been tested 11 times in 2019 by Usada, has not spoken publicly since pulling out of the Birmingham Diamond League meeting last Sunday citing “complications occurring after practice this week”.

Britain’s Christine Ohuruogu is one of the highest profile athletes to have fallen foul of the whereabouts rule having been banned for 12 months in 2006, prior to winning 400m gold at the 2008 Olympics and two world titles. However, others have had greater success in contesting whereabouts failures, including the British cyclist Lizzie Deignan, who successfully argued at the court of arbitration for sport that one of her three missed tests before the 2016 Rio Olympics was the fault of the authorities.

President Donald Trump on Friday declared the southern border of the United States to be a national emergency, catapulting the country into uncertain legal and political battles as he seeks to fulfi
Read More
March 12, 20190

California could launch its own generic prescription drug label