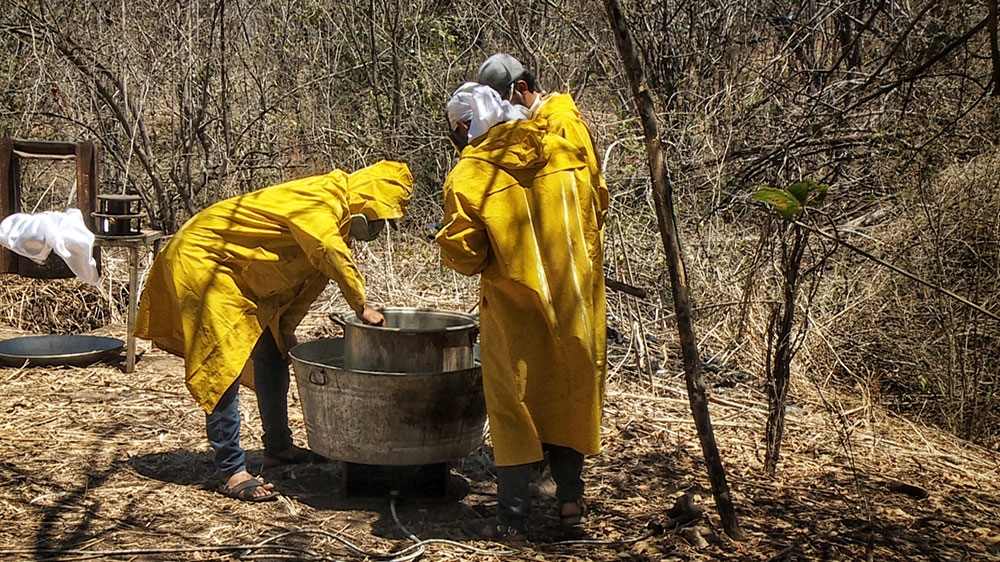 Sinaloa, Mexico – Three young men wearing yellow plastic overalls and gas masks huddled around a large pot on an industrial-sized Bunsen burner sitting in a clearing in the woods of the Northern Mexican state of Sinaloa.

Punteros (lookouts) were posted nearby.

“We’ve made a deal with them,” said the man in charge, referring to local and state police.

The three Sinaloa Cartel members first added the poppy-gum residue to the pot, stirring its contents with a large wooden ladle traditionally used by Mexican families to make pozole stew.

One of the men then took out a small plastic bag filled with what looked like baking powder. In reality, however, this substance – fentanyl – is dangerous and potent. The man made the sign of the cross against his chest and shook the powder into the pot while the others continuously stirred.

Eventually, the mixture’s juices were drained, sifted and refined. The two-day process resulted in chiva sintentical, or synthetic heroin, which would later be smuggled across the Mexican border into the United States.

Until about two years ago, drug cartels would have relied on poppy gum mixed with chemicals to make heroin. But now, poppies play a lesser role, if one at all, in making synthetic heroin and other drugs sent to the US. Instead, drug cartels are turning to fentanyl.

According to the US Drug Enforcement Agency (DEA), fentanyl, a synthetic opioid, is 50 times more potent than heroin. Opioids were responsible for the majority of the US’s 72,000 overdose deaths in 2017. China and Mexico are the two major sources of fentanyl, which US President Donald Trump has called a “horror drug”.

While the US administration put pressure on China to try and stop the drug from entering the states, criminal organisations – including the Jalisco Nueva Generacion and the Sinaloa Cartel -south of the border are grabbing hold of a large part of the fentanyl trafficking market, and in turn, pushing traditional poppy farmers out business.

The poppy farmers: Growing to survive

About 150km north of where the Sinaloa Cartel members were manufacturing synthetic heroin, three poppy farmers headed up into the pine forest to take a look at their crops from above.

A luminous carpet of pink, red and purple flowers glinted in the first rays of the morning sun. The plot is hidden, like so many others, within the craggy folds of the Sierra Madre mountains. Poppies have been grown here for more than a century. They’re cultivated, not for their beauty, but for their gum.

Farmers here have been selling their crop to drug traffickers for generations. Although they admit the crop is illegal, they say they are merely growing it to survive.

“There isn’t enough land to grow quantities of corn [and] tomatoes for profit,” one farmer Al Jazeera. “If everyone in the community did that, we wouldn’t earn enough to buy shoes, clothes [and] school bags for the children.”

But over the last two years, poppy gum has lost much of its worth, decimating the farmers’ work and their livelihoods. While residue from their poppies is occasionally used to cut fentanyl, heroin itself is no longer the preferred drug of choice for traffickers here.

“Our clients in the US now just ask for fentanyl,” says an independent drug trafficker in the Sinaloan state capital of Culiacan. “They don’t want heroin from poppy plants because they say that fentanyl is stronger, more potent. It means they can cut it and earn more when they distribute it in the streets.”

As a result, the price per kilo for poppy gum has plummeted to around a third of its former value in Sinaloa, according to farmers and local media.

In Guerrero, another poppy hot spot in southern Mexico, it is worse. Farmers get seven percent of what they received 18 months ago, said Romain Le Cour Grandmaison, one of the authors of a year-long study on poppy farming from the Network of Researchers in International Affairs.

“If you go to villages in Guerrero, there’s kilos of opium paste rotting because no one comes to buy it,” he said that farmers have told him.

That could mean the death knell for communities dotted across the country. With no demand for their crops, many of the farmers Al Jazeera spoke to are thinking of migrating.

“It’ll be sad to leave because we’ve always lived in the village and been able to get by,” said one farmer.

“Then to realise from one day to the other that this isn’t working anymore, and have go to the other side – that’s tough,” he told Al Jazeera, adding that he is poised to take his wife and two daughters to the US.

Not all farmers are considering leaving, though. Others may be tempted to go deeper into organised crime, said Le Cour Grandmaison.

“Some of them have weapons and are now being offered employment by criminal groups as hitmen or other roles. So you actually have people moving into more dangerous and violent roles,” he added.

That’s precisely what the Mexican government wants to avoid. It is already struggling with record levels of violence in the country. Newly unemployed poppy farmers could add to that. But they could also present a golden opportunity for one of the long-stated aims of President Andres Manuel Lopez Obrador: luring those on the lowest rungs of organised crime into legal employment.

Responding to a question about Guerrero poppy farmers who are asking for help, Lopez Obrador recently said in a press conference that he is already moving to offer poppy farmers aid.

“Many of them are being helped, and will be helped. All of them. Even in the presidential debates, I suggested that where there was poppy farming, we could stimulate the production of corn and pay a better-than-fair price for the corn to compensate for (losing) the poppy,” he said.

During a February visit to Sinaloa state, Lopez Obrador promised opportunities for young people caught up in organised crime. The farmers Al Jazeera spoke to cautiously welcomed the president’s comments.

“We do want the government to pay attention to this,” one farmer told Al Jazeera. “In part, it’s their job to eradicate poppy fields. But maybe they also have the solution – if they look at us in the Sierra and give support to the families here,” he said, adding that the government should also invest in projects – reforestation and other types of farming – to help the communities in the region.

Meanwhile, Mexican drug cartels are facing a potential crisis of their own. Not in what they can sell, but from where they get their fentanyl.

Earlier this month, China – from which Mexican cartels import much of their fentanyl – banned production of the drug and many of its precursors.

Cristobal Castaneda Camarillo, the police chief of Sinaloa, predicts the ban will hinder fentanyl production in Mexico somewhat, but he cautioned, “to think that the organised crime groups that are behind this will stay with their arms crossed would be very inadequate”.

Although local authorities deny that cartels have yet to discover how to make fentanyl in Mexico, the DEA’s 2018 Drug Threat Assessment documented the 2016 discovery of at least one fentanyl laboratory where the drug was apparently cooked from scratch.

The cook and traffickers that Al Jazeera talked to said that the groups they work with are trying to make fentanyl from scratch. If that happens, it will mean a substantial advance in technology from the three young men cooking up imported fentanyl with rudimentary equipment in the woods.

And if Mexico’s powerful criminal groups do get hold of the entire fentanyl supply line, it would be a major setback for both the Mexican government and the Trump administration trying to clamp down on the drug’s entry into the US.

The independent drug trafficker in Culiacan also believed that it could ultimately spell bad news for narcos in Mexico.

“I think fentanyl is going to cause a problem because of so many deaths of those that are using it.” he said. “There’ll come a moment when the federal government is putting more and more blocks on this, closing more and more doors/ports and it’ll be a lot more difficult to do business than now.”

Despite the concern, he has no intention of ceasing to traffic in fentanyl. In a business free of moral or legal concerns, supply and demand remains the only law, and the biggest demand right now continues to be fentanyl.

California could launch its own generic prescription drug label

Women's hormonal cycles may not only make them prone to drug addiction but are also affected by triggers that lead to relapse, new research has found. When fertility-related hormone levels are high
Read More

Setting aside the order of lower court, the high court acquitted both the petitioners (Representational) Chandigarh:  The Punjab and Haryana High Court has issued 25 "mandatory" directions, i
Read More