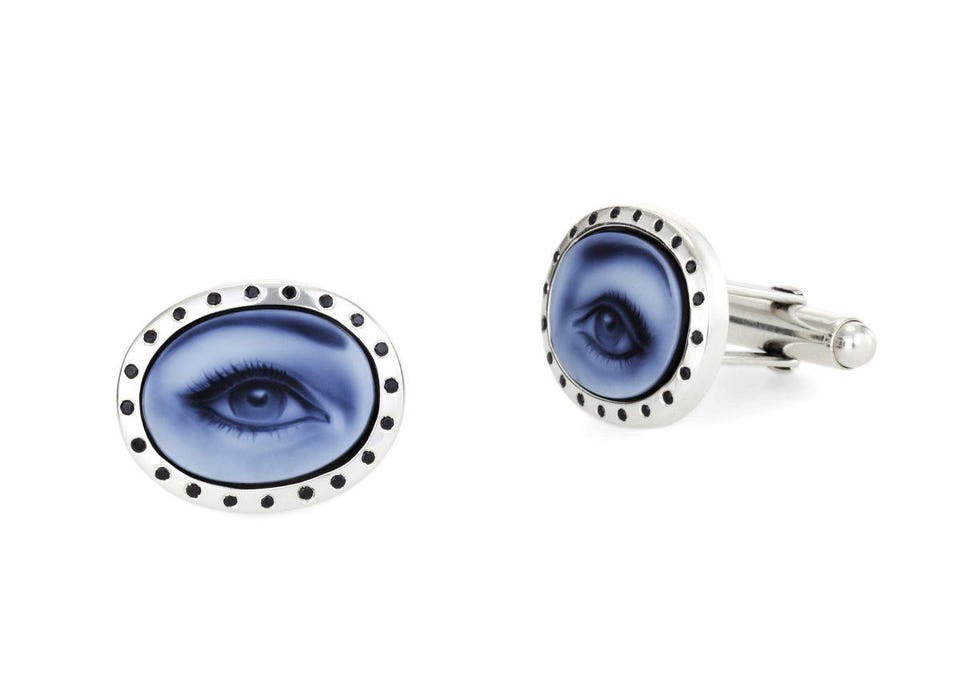 The origin of lover’s eye jewelry dates back more than 230 years to King George III’s reign, during which his son, the Prince of Wales (later George IV), became besotted by Roman Catholic, twice-widowed Maria Fitzherbert. Apart from being a commoner who worshipped outside of the Church of England and who was otherwise unsuitable royal marriage material, Maria was six years older than the Prince. Undaunted by his father’s opposition to the affair, Prince George sent Maria a secret marriage proposal in 1785, accompanied by a miniature, watercolor-on-ivory portrait of one of his eyes that he had commissioned. Visually proving the Prince’s ardor while maintaining his anonymity, this clandestine love token, along with the painted miniature of Maria’s eye that the Prince wore pinned under his lapel, ignited the secretive, sexy sub-genre of lover’s eye jewelry, which became the height of fashion in Georgian times. 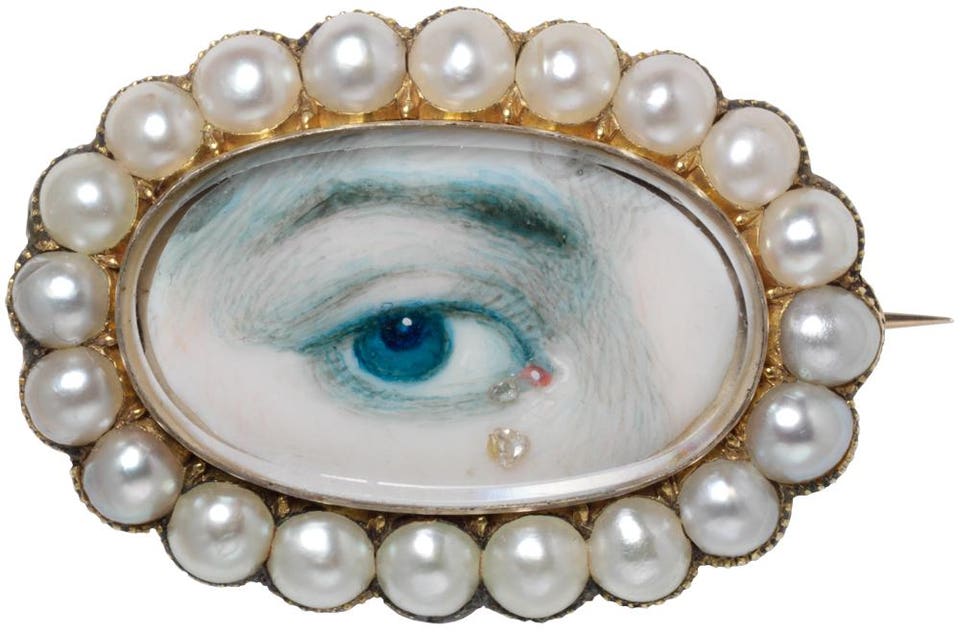 Dating from the late 18th century, this pearl-rimmed lover’s eye peers out from the permanent collection of London’s Victoria and Albert Museum.VICTORIA AND ALBERT MUSEUM

Soon eligible, affianced and even married British aristocrats were commissioning and exchanging lover’s eye mini-portraits set in precious metal rings, lockets, and brooches. (These were often variously embellished with pearls, diamonds or colored stones. What’s more, lover’s eye lockets and brooches would sometimes contain locks of hair bestowed by the giver to intensify the romantic power, and emotional value, of the piece. The lock of hair was often encased behind glass or clear rock crystal on the jewel’s underside.) 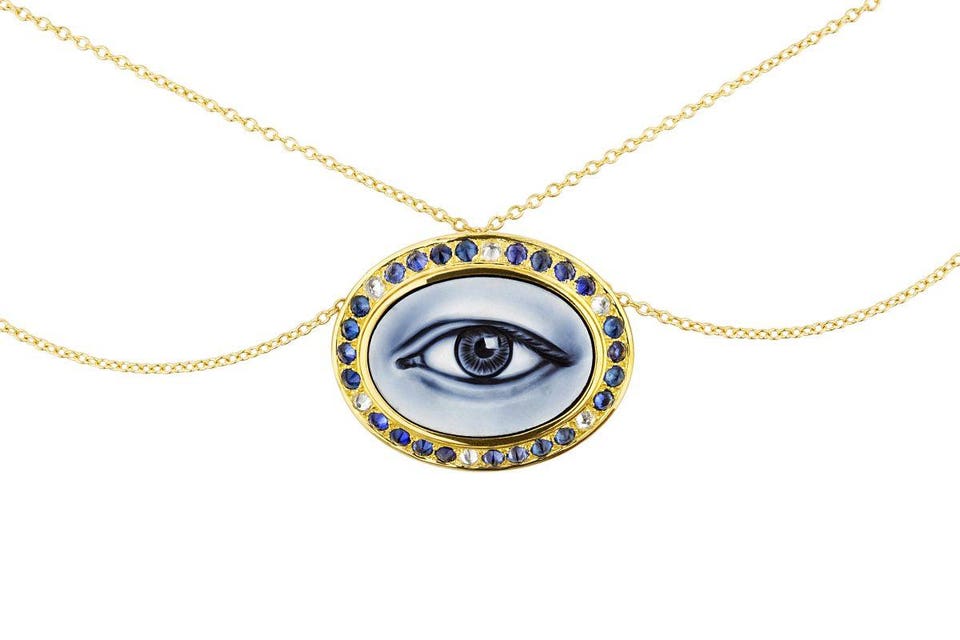 During the 18th century and the Victorian era, many a lover’s eye was worn or carried by Europeans, Russians and wealthy Americans. Happily married members of the haute bourgeoisie and, presumably, more than one unhappily closeted gay couple also wore lover’s eyes or toted eye-adorned toothpick cases or snuff boxes in order to keep part of their heart’s desire on hand, and in view. While Prince George and Mrs. Fitzherbert did indeed marry in a secret ceremony at her Mayfair residence on 15 December 1785, they and their guests knew that the union was invalid due to the 1772 Royal Marriages Act, which prohibited the Prince to marry without the King’s documented consent. In time, the star-crossed liaison flamed out and the Prince, mired in debt, married his cousin, Princess Charlotte of Brunswick, in exchange for Parliament paying off  his myriad clamoring creditors. 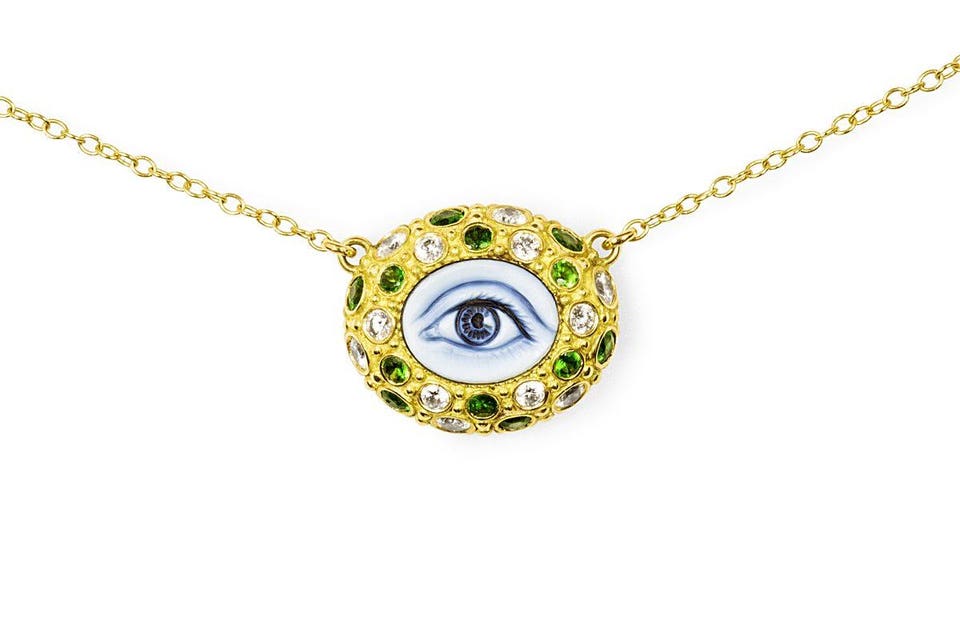 Those wishing to replicate a loved one’s gaze must supply close-up photos to designer Ana Katarina Vinkler-Petrovic, who then passes these along to her artisans as the basis for a hand-carved agate likeness of the eye. “My version of a lover’s eye ring, pendant, bracelet or necklace,” she explains, “can be surrounded by inverted brilliant cut diamonds, round brilliant pink or blue sapphires, green tsavorite garnets, or any other gemstone the client requests.” Typically, it takes six weeks for Ana Katarina to fulfill a bespoke Eye Love commission. Prices range from about US$4,700 to $9,000, depending on the nature and carat weight of the colored stones and diamonds requested by the client. In a fittingly romantic gesture, the inside of each Eye Love jewel is engraved with the word ‘love.’

“I started making lover’s eye jewels because I wanted to make this highly romantic jewelry realm relevant to our times,” Vinkler-Petrovic explains. “I believe in love, I believe in lovers, and I believe in raising consciousness!” That belief has paid off handsomely in both aesthetic and monetary terms. “The Eye Love collection forms a major segment of my business,” she notes, and a portion of sales from this range is, as of this writing, being donated to the non-profit organization Baby2baby http://baby2baby.org , which provides children from low-income families basic necessities. 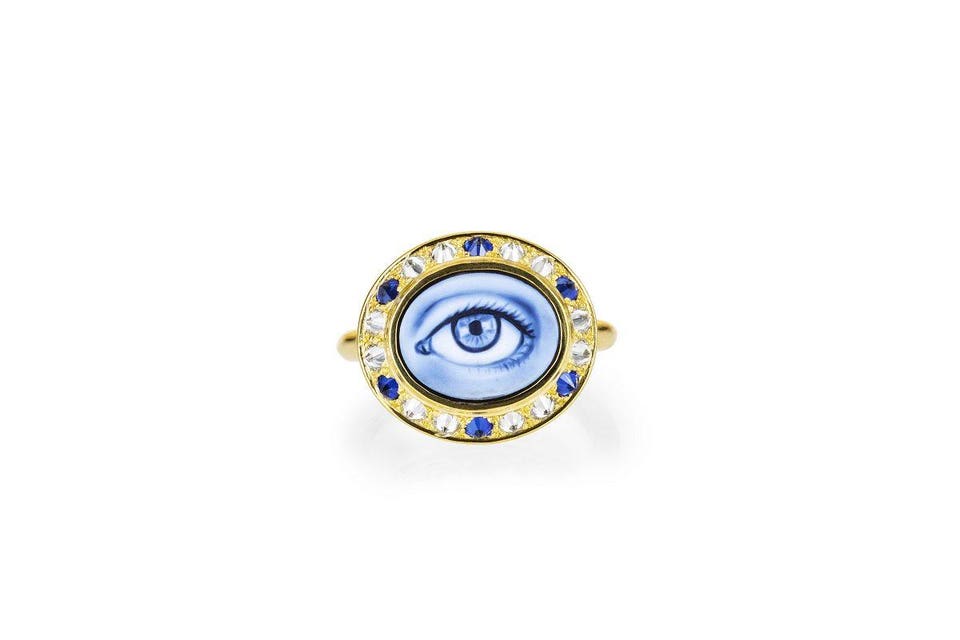 Whether you believe eyes are the human soul’s windows, mirrors or simply organs of vision, “All eyes are jewel-like in the variegated colors, beauty and light they embody,” says designer Ana-Katarina Vinkler-Petrovic, whose Eye Love collection updates traditional lovers’ eye jewels for the 21st century. The designer wears a hand-carved agate representation of one of her own eyes, in the form of a ring. “My Eye Love ring reminds me to tap into my inner vision and trust my intuition,” she explains.COURTESY ANA KATARINA

As bestselling Brazilian author Paulo Coelho writes in Manuscript Found in Accra, “The eyes are the mirror of the soul and reflect everything that seems to be hidden; and like a mirror, they also reflect the person looking into them.” Vinkler-Petrovic agrees, adding, “I’ve made jewels of lovers’, mothers’, husbands’, sisters’, wives’ and daughters’ eyes.” (She has even created “selfie” eyes for introspective clients who want to wear and see psychic reminders of their inner vision, third eye and intuition.) “My bespoke Eye Love commissions,” the designer continues, “are tangible proof that the lover’s eye tradition is continually expanding to include friends and even loved ones who have departed.” In fact, “We just had a daughter commission an Eye Love ring for her mother that pictured her late husband’s eye,” she relates. “When her mother received this jewel, she removed her wedding ring forever, and started a new tradition by wearing the ring picturing her husband’s eye on her right hand.” 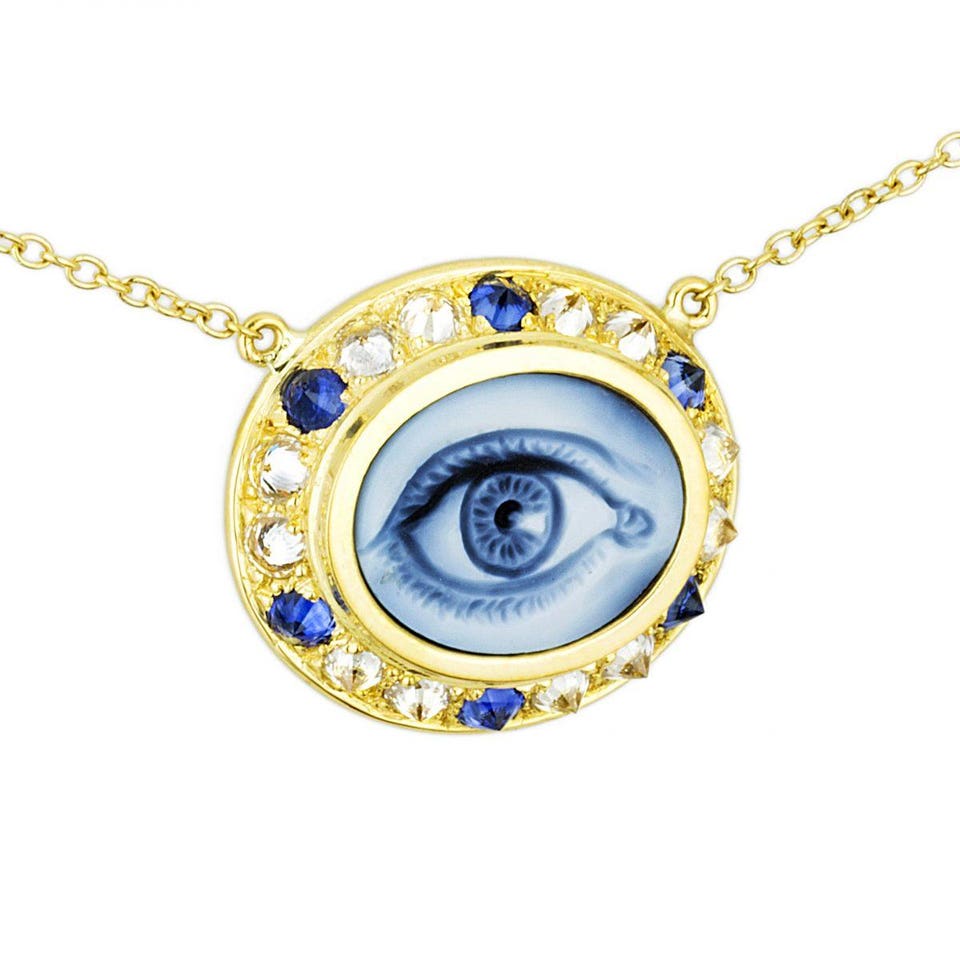 Whether one believes the eyes are the mirror of the soul, or not, there are few more heartfelt or artistic ways to honor another than by wearing and gazing at one of their eyes in the form of a precious jewel. “In my life, I’ve seen so many different pairs of eyes that embody colors of precious gemstones,” Vinkler-Petrovic recalls. “For example, light blue eyes that variously resemble London blue topaz, aquamarines, blue zircons or blue sapphires. While the actress Kate Bosworth has one blue eye and one eye that is half-hazel and half-blue, like a bi-color tourmaline,” she continues, “the late actress Elizabeth Taylor had violet-colored irises, which sometimes looked similar the gemstone Alexandrite, which changes color from mainly purple to blue, depending on the light.”

Airbnb Eyes the Sky With Hire of Aviation Executive